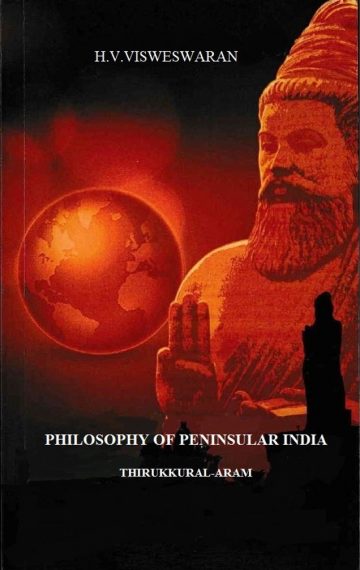 Any book on INDIAN PHILOSOPHY or INDOLOGY, deals mainly with the Vedas, Bhagavat Gita (Gita), Upanishads, Ramayana, Mahabharata ,Buddhism, Jainism and other ‘orthodox-systems’. All of them are: Topics based on the Northern part of India – Sanskritic/Vedic. The authors of such books , perhaps, took it for granted that the ancient Indian thinkers had no other approach in interpreting the life of the humans. The rich civilization of the Tamils, the inhabitants of the land from time immemorial, and their matured thinking on human life is not considered as Indian philosophy or philosophy.
thirukkuRaL (kuRaL) , PHILOSOPHY OF PENINSULAR INDIA. is a compendium of many things pertaining to human values and thought. They are brief and precise, well written without any vagueness or confusion either in meaning or syntax. The verses are direct in their concept and clear in their meaning. The classic kuRaL is a book that does not deal with any speculative concepts, as found in the Upanishads . Speculation gives raise to multiple interpretations and the possible conflicts. They ultimately divide the society they intend to enrich. The vagueness and speculative character encourages people with vested interests to meddle with the text by inserting passages.
kuRaL is written in three parts. Part1. aRam, virtue, part 2. poruL, wealth, and part 3. kaamam, love. In the third part Kaamathup-paal. of kuRaL, the poet tells about two stages through which a young boy and girl unite in wedlock. The first stage is when the boy and girl start meeting without the knowledge of elders. It is called kaLavu. . The dating stage – Dravidian style. Later they enter into wedlock – a stage called karpu – when they marry and start living together and raise a family. The marriages are love marriages. Then it was an accepted form of marriage.
So we see a well structured society with freedom for men and women. The verses of kuRaL brings out a picture of a sophisticated , matured society that was the Dravidian Tamils , thousands of years ago. kuRaL is dated around 200 BC . So we can safely conclude that the Tamil society was well advanced , as depicted in the verses of kuRaL, many centuries earlier than kural. Kural, a book which is perfectly relevant even to-day after 2000 years and more, must be taken into account to understand the perfection the society might have attained earlier than 2000 years. Such an evolved society in a remote antiquity shows that their culture has thrived in that state for many centuries prior to these works.
A work of grammar is attempted only after the literature matures. kuRaL has to be taken in the group of grammar as it is a compendium of good practices prevailed in the region and followed by the people and explains the meaning of life in short couplets.
The works of Tamil scholars of those earlier periods are lost either due to sea upheaval which entered the land and destroyed or due to wanton destruction by people who were jealous. Had the previous works were available, the Dravidian culture, its glory and perfection might have been established with much more authority and may be dated back to few more millennial earlier.
In this book we discuss the part 1 of kuRaL, aRam (virtue). It is the philosophic part of the book. It explains the meaning and purpose of life. The discussion and explanation in kuRaL are realistic without any speculative thinking. So it appeals to an universal audience; acceptable to all religions, nationalities and ages. This fact is seen by the fact that the book survives all these thousands of years and still current. It is translated into almost all languages of the world.